Visit the Funky Frets Music Store site for ALL your Ukulele goodies...

The Funky Frets Uke Fest is hosted and brought to you by the Funky Frets crew of Curt, Bern, Kelly, TJ, Ali, and a few dedicated volunteers come the actual festival weekend.

Here is my take (Curt Sheller) on what skills are needed to classify yourself into different levels of ukulele players. Take into account that you might be a beginner in one aspect of your playing and learning and intermediate or advanced in other aspects. — Curt Sheller

Regardless of the resources you use to learn to play any instrument, it's important to know what there is to learn and how that affects what you want to do. Whether it's playing in a band, singing and playing or being a singer – songwriter, there are specific things to learn and specific skills to develop. Here's an overview of the ten most fundamental things to learn for ukulele.

The first 19 chords are the open position chords A, C, D, E, F, G, Am, Cm, Dm, Em, Fm, Gm, A7, B7, C7, D7, E7, F7, G7. Typically, barre chords or movable form chords are learned next. These chords are based on the open position, first chords you learned and have an advantage because they can be moved to different keys. Their disadvantage is that they're harder to play, at least initially. Finally 4-part chords, triads and more advanced chords and your off to the races.

Download the handy / dandy Basic Ukulele “Uke” Chords - “C” Tuning [C E G A]. High or Low G chord chart. The chart is arranged in common keys. A beginner player should be able, after a bit to play all the chords in row one, starting with C. 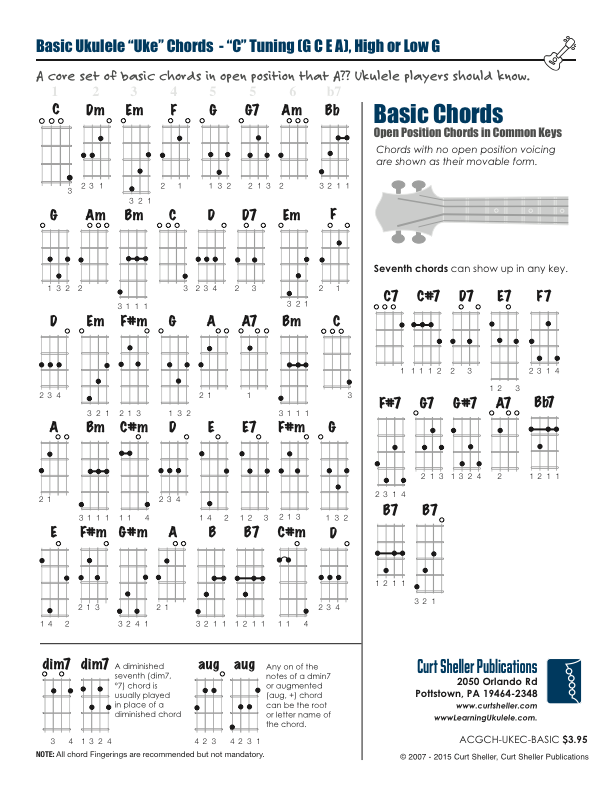 Technique, is the ability to control your hands individually and in combination. It's primarily a physical skill not a musical skill. The training and development of your hands is a prerequisite and necessary to develop musical skills.

There are many exercises designed to get your hands in shape. Finger independence drills, barres and stretches are just three good ways to develop your hands.

Notes on the Neck • C Tuning

Like their guitar brethren it's unbelievable how weak ukulele players are on knowing the notes on their own instrument!

No other instrument suffers from this same fate. Imagine a piano player not knowing the note names of the keys or a trumpet player not knowing what notes come out if they push specific valve combinations. Yet, an amazingly high percentage of guitar and ukulele players don't know the notes on the neck.

This problem has certainly been created by the guitar world's penchant for tablature and chord picture diagrams, which is also prominent in the ukulele community. Despite this, there is no excuse for the failure on the part of players to learn what is absolutely rudimentary on any other instrument. 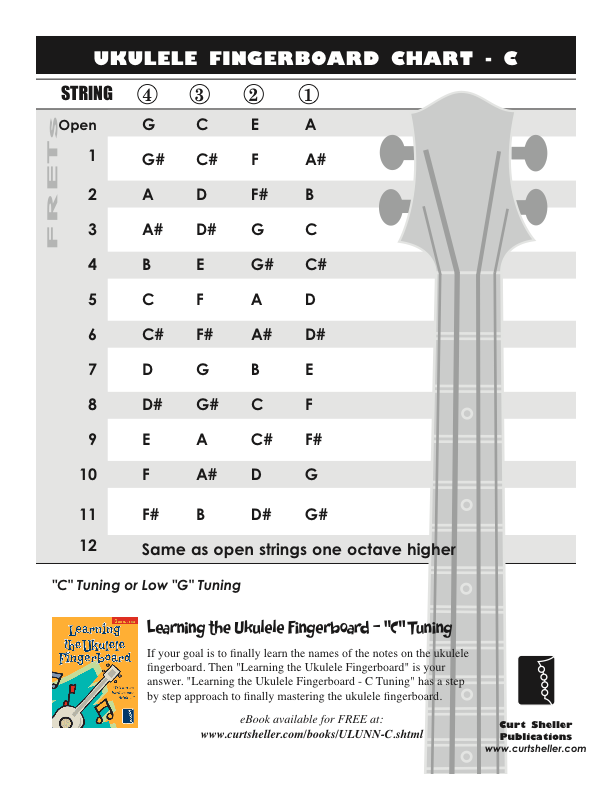 This skill is part of the accompaniment role the ukulele is most used for. All songs, besides having chords, are played in a particular style and have an associated strumming pattern or patterns that is responsible for conveying the particular “feel” of the song.

Strumming captures the most primitive element of music – rhythm. That tendency to tap our feet when we hear music can often be traced to the strumming pattern.

Scales, are organized streams of notes that can be used to generate melody or improvisation. There are many kinds of scales to learn depending on the musical style you choose. The two most common contemporary scales are the Blues Scale and the Pentatonic Scale. The Blues Scale is used in the darker forms of Blues and in heavier Rock Music. The Pentatonic Scale is used in all things Southern: Southern Rock, brighter Blues, Country music and even Motown.

Beyond these scales, there are many more to learn if the music you play needs them. Santana used the Dorian Scale to great effect while Mark Knopfler of Dire Straits made a living from the Aeolian Scale. Jerry Garcia’s favorite scale was the Mixolydian Scale. Eric Calpton is a master of combining the Blues and Pentatonic scales.

Rhythm, is one of the three primary components of music (Melody, Harmony, Rhythm), It encompasses several aspects. On the one hand, rhythm is the duration of a note or a chord. It also includes tempo, the beats per second as measured by a metronome and the stability of the beat. Rhythm, as in tempo, can vary during a song. Some songs maintain a steady tempo from beginning to end. Other songs vary the tempo. Slowing down is called Ritardando and speeding up is called Acclerando. These are intentional musical effects and not the result of a player not being able to keep steady time or rhythm. The ability to “Keep Time” is one of the most important skills a ukulele player or any musician can develop.

This is most likely you get into wanting to learn a musical instrument, especially the ukulele — you want to play songs.

This area is your song list, your repertoire, what you can play from beginning to end. Without a repertoire, you have nothing to play. An audience is certainly not interested in listening to scales, arpeggios or exercises of any kind. They respond to songs no matter what style of music you play. It could be original songs or cover songs — but one way or another, you need to learn songs. And, chances are that is what drew you to wanting to play the ukulele - NOT exercises and theory.

What does it mean to learn a song? The singer songwriter's version of learning a song would be to memorize the chords, the strum or finger pick, the melody, the form, the chords and the lyrics. The jazz guitarist and ukulele player version is to learn the single note melody, the chord changes, the form, the melody and chord inversions for combining single note melody and chords and the improvisational structure. Unless you use the lyrics as inspiration for the mood and feel of a song, lyrics are not part of the instrumental process.

Adapted for ukulele and used with permission from my years of study with Chuck Anderson.

Which Way Is Up?

What is up, down, higher, lower, top, bottom, ascending, descending?

A Novice Ukulele player is just starting out with ukulele and pretty much knows nothing about the ukulele or music – clean slate. This is a great place to start, no bad habits, a blank musical canvas and only forward progress is possible. You're just beginning a musical journey with this wonderful instrument.

A Beginner Ukulele player might know a chord or two. Might need some work switching between chords and playing in time. They might only know the names of the open strings as you need those so you can tune your ukulele — but not much more.

A beginner ukulele is not confident enough to change chords in different keys while keeping a steady beat. Might not even have any concept regarding keys.

An intermediate player can hear when chords change in a song or progression. Usually learns new songs from friends or tablature (TAB). If making their own arrangements, they are usually fairly simple. An intermediate player knows there's life above the fifth fret but not what to do with it.

An intermediate player can sing and strum at the same time easily; learns chords to simple tunes fairly quickly.

An advanced player should be able to read music and know where the notes are on the fingerboard. They might not be able to sightread on demand - but read to figure out and learn new material.

An advanced player can play any chord that is required. They have a understanding of open position chords, movable form chords and 4-part, aka “Jazz” chords, free form chords.

An advanced player can hear I, IV, and V chords, has mastered chord inversions, knows there is life above the fifth fret. Plays lead and backup easily with others and keeps steady rhythm.

An advanced player knows the difference between a scale and a mode. Knows the names of the notes in the chords they are playing.

An advanced player is really a musician that happens to play the ukulele.

Original Curtie Animation from 1987 for my first web site on a Macintosh II, 36 years ago.